As a self-proclaimed perfectionist and chronic worrier, I frequently look at my life and give myself a lot of “shoulds.” I should be spending more time on self-care. I should exercise more. I should park my phone after 10:00 p.m. so I can actually sleep for once in my college existence.

As college students, we spend so much time in our heads. Right now, we live for theory, definitions, equations and complicated models. It’s so easy, at least for me, to forget that I am more than a vessel for learning and applying information. I am a human being, not a human doing, as Pastor Kate sometimes jokes. And yet every time I simply be, my shoulds and self-criticism pop up like the shark from Jaws. 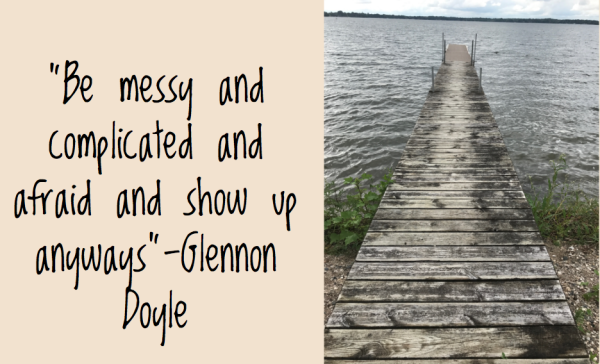 I felt like I was the worst college student, until I went to Pause and talked about my seemingly endless weaknesses with other Lutheran Campus Ministry members. When I shared, I was so relieved to hear others had a similar experience. “Don’t worry; we are all there.”

There is so much power in the conviction that we are not alone. I felt so much less pathological and existentially weak when I realized that a lot of people were going through not only the mistakes I was, but the shoulds and self-judgement followed by these mistakes.

After watching Brené Brown’s Ted Talk on vulnerability, I felt the very familiar self-judging perfectionist emerging from the deep dark depths of my insecurities. Part of being a perfectionist for me is wearing dense armor so it appears that nothing gets to me; I really don’t like admitting I’m sad, stressed or angry, and a lot of times its my silence about what I am going through that keeps me feeling alone.

However that night, I challenged myself once again to be vulnerable, to be real. That night we all embodied courage, a word that Brené Brown defined as “showing your whole heart.” I learned last year that I could go days without talking to anybody if I wanted; this campus can easily be large, isolating, and anonymous. Shedding my armor felt so good because I was no longer anonymous; I was seen.

In sharing our messy, imperfect stories full of shoulds and some mistakes, I felt so close to these women. It was probably a -5 degree day, but I felt warm. Drinking in the wisdom of my huddle group’s stories, I felt like I knew myself a little better now too. And for just a little bit, I could breathe easy with my inner perfectionist quiet and pondering.